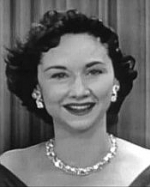 Born in Chicago, Kilgallen was the daughter of Hearst newspaperman James Lawrence Kilgallen and his wife Mae Ahern. The family moved from Chicago to Wyoming, Indiana and back to Chicago before finally settling in New York City. After two semesters at The College of New Rochelle, Kilgallen left for a job as a reporter for the New York Evening Journal, which was owned and operated by the Hearst Corporation.

In 1936, Kilgallen competed with two other New York newspaper reporters in a race around the world using means of transportation only available to the general public. She was the only female contestant and she came in second. She described the event in her book Girl Around The World and penned the screenplay for a 1937 movie, Fly Away Baby, starring Glenda Farrell, as the Kilgallen-inspired character. During a stint living in Hollywood in 1936 and 1937, Kilgallen wrote a daily column that could only be read in New York that nonetheless provoked a libel suit from Constance Bennett, “who in the early thirties had been the highest paid performer in motion pictures,” according to a Kilgallen biography, “but who was experiencing a temporary decline in popular appeal.”

Back in New York in 1938, Kilgallen began writing a daily column, the Voice of Broadway, for Hearst’s New York Journal American, which the corporation created by merging the Evening Journal with the American. The column, which she wrote until her death in 1965, featured mostly New York show business news and gossip, but also ventured into other topics like politics and organized crime. The column was eventually syndicated to 146 papers via King Features Syndicate.