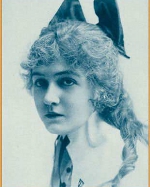 Dorothy Elizabeth Gish was an American actress, and the younger sister of actress Lillian Gish.

The Gish sisters’ mother, Mary Robinson McConnell “Gish”, supported the family after her husband, James Leigh Gish, abandoned the family. When they were old enough, Dorothy and Lillian were brought into their mother’s act, and they also modeled. In 1912, their childhood friend, actress Mary Pickford, introduced them to director D.W. Griffith, and the sisters began acting at the Biograph Studios. Dorothy and Lillian Gish both debuted in Griffith’s An Unseen Enemy. Dorothy would go on to star in over 100 short films and features, many of them with Lillian.

Linda Arvidson, Griffith’s wife remembered in her autobiography, When The Movies Were Young

In Hearts of the World, a film about World War I and the devastation of France, Dorothy found her first foothold, striking a personal hit in a comedy role that captured the essence of her sense of humor. As the ?little disturber?, a street singer, her performance was the comic highlight of the film, and her characterization in this role catapulted her into a career as a star of comedy films.