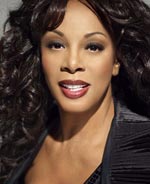 LaDonna Adrian Gaines, known by her stage name, Donna Summer is an American singer who gained prominence and notoriety during the “disco” era of the seventies with the majority of her early work produced by the team of Giorgio Moroder and Pete Belotte.

Summer’s number of hits, in the late seventies included “Love to Love You Baby”, “I Feel Love”, “Last Dance”, “Hot Stuff” and “Bad Girls”. These hits helped the singer earn the title “The Queen of Disco”. Following her split from Casablanca Records in the early 1980s and following a backlash against disco, Summer continued to have hits in various genres including “She Works Hard for the Money” and “This Time I Know It’s for Real”.

Summer was the first artist to have three consecutive double albums hit number one on the US Billboard chart and was also the first female artist to have four number-one singles in a thirteen-month period. Summer has sold more than 130 million records worldwide.

Born on New Year’s Eve 1948 in the multi-racial Dorchester neighborhood of Boston, Massachusetts, Summer was one of seven children raised by devout Christian parents. Influenced by Mahalia Jackson, Summer began singing in the church at a young age. While singing her first solo at church, Summer said she received an epiphany from God to use this voice to become a star and to not ever misuse her voice. In her teens, Summer formed several groups, including one with her sister and a cousin, imitating Motown girl groups such as The Supremes and Martha and the Vandellas.