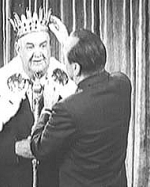 Don Wilson was an American announcer and occasional actor in radio and television, with a Falstaffian vocal presence, remembered best as the rotund announcer and comic foil to the star of The Jack Benny Program.

Wilson began his radio career as a singer over Denver radio station KFEL in 1923. By 1929, he was working at KFI in Los Angeles.

Though best known for his comedy work with Benny, Wilson had a background as a sportscaster, covering the opening of the 1932 Summer Olympics. Wilson first worked with Benny on the broadcast of April 6, 1934, concurrent with a short stint as announcer on George Gershwin’s series, Music by Gershwin. At and over, Wilson possessed a resonant voice, a deep belly laugh, and a plump figure, all of which would become important parts of his character with Benny. Though Wilson’s primary function as announcer was to read the opening and the commercial pitches — notably for Jell-O, Grape-Nuts, and Lucky Strikes — his importance to the program was as both feed and foil to Jack and other cast members. A recurring goal was his effort to get the Sportsman’s Quartet singing commercial approved by Benny.

On radio in particular, Wilson’s girth could be exploited, both in jokes by Benny and in audio gags, such as the amount of time it took an railroad porter to brush the soot off of Don following a train trip, or to measure charging him by the pound.