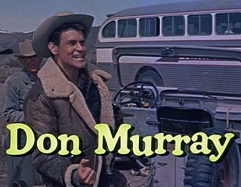 Murray was born in Hollywood, California. He attended East Rockaway High School in East Rockaway, New York where he played football and track, was a member of the student government and glee club and joined the Alpha Phi Chapter of the Omega Gamma Delta Fraternity. From high school he went on to the American Academy of Dramatic Arts.

Murray had a long and varied career in films and television, including his role as Sid Fairgate in the long-running prime-time soap opera Knots Landing from 1979 to 1981. He was nominated for an Academy Award as best supporting actor in Bus Stop in which he co-starred with Marilyn Monroe.

He starred as a blackmailed United States senator in Advise and Consent, a film version of a Pulitzer Prize-winning novel by Allen Drury that was directed by Otto Preminger and cast Murray opposite Henry Fonda and Charles Laughton. He also co-starred with Steve McQueen in the film Baby the Rain Must Fall and played the ape-hating Governor Breck in Conquest of the Planet of the Apes .