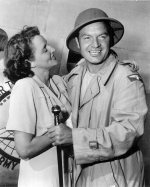 Dolores DeFina Hope, singer, philanthropist and wife of comedian Bob Hope, died today at the age of 102 of natural causes.

She was born in Harlem New York in 1909 and died at her home in Toluca Lake California of natural causes.   Dolores Reade was singing at the Vogue Club in Manhattan when she was introduced to rising Broadway star Bob Hope.  As he described it, it was “love at first song”.  They were married for nearly seventy years.  The Hopes moved to California in the late thirties so that Bob could pursue his film and radio careers.  They built a home in Toluca Lake where she lived until her death.  Bob and Dolores adopted four children and Dolores became an advocate for adoption, serving on the board of Holy Family Adoption Services in Los Angeles.  She was a lifelong Catholic and a proud member of St. Charles Borreomeo Church in North Hollywood, where she gave much time and financial help over the years to various parish causes including the building of the Lady of Hope chapel and the Holy Family Social Service Center.  Throughout her life Dolores was devoted to Catholic causes especially those directly benefiting the poor.  She and Bob were members of Lakeside Golf Course where she was runner up to the women's club champion for several years.  The Hopes also had a home in the Palm Springs area since the mid forties; Dolores worked with renowned architect John Lautner designing their most recent home in the Southridge Estates.  The house quickly became a showplace and a venue for their various desert social and charitable events including parties in conjunction with the annual “Bob Hope Chrysler Classic.” Dolores was founding president of the Eisenhower Medical center in Palm Desert and was intensely involved in the building and décor of the hospital. From 1968 to 1976 she served as President of its board and since 1977, its Chairman becoming Chairman Emeritus in the nineteen nineties.

Though she accompanied her husband on many of his USO trips to entertain the troops usually closing the show with a touching rendition of “Silent Night” she really had put her singing career on hold to be at his side and to raise their children.  But at the age of eighty-three she revisited a long postponed singing career, recording several albums and performing with Rosemary Clooney in New York at “RAINBOW AND STARS” for several weeks and receiving rave reviews. Throughout her life Dolores was a gracious hostess and great asset to her world famous husband.  She made her last visit to the servicemen and women during “Operation Desert Storm” Performing “White Christmas” from the back of a truck in the middle of the Saudi desert.  She was eighty-four at the time. Dolores Hope was feted with six honorary degrees and many awards for her humanitarian efforts, including: The Lifetime Achievement Award for Humanitarian Services by the National Italian American Foundation; the Ellis Island Medal of Honor (for her contributions Irish heritage); the Magnificat Medal (1987) from Mundelein College, Chicago, for her outstanding family, social, philanthropic and religious leadership; the Big Shoulders Humanitarian Award; the St. Martin de Porres Award from the Southern Dominican Foundation, New Orleans (1990); “Bob Hope 5 Star Civilian Award,” at Valley Forge Military Academy; “Sprit of America Award” from the Institute for the Study of Americans, for community service and commitment to her country; “Living Legacy Award” for humanitarian efforts in San Diego; she participated in the dedication of the Dolores Hope All Faiths Chapel in Ft. Walton Beach, Florida, at the Air Force Enlisted Widow's Home in Bob Hope Village.  In 2001 she was honored by the American Ireland Fund for a lifetime of work benefiting Humanity and presented with a beautiful Waterford Harp.

Dolores Hope has been the Honorary Mayor of Palm Springs five times and named “Woman of the Year” by the Los Angeles Times.  In 2008, she was honored in by the Ladies Professional Golf Association with its Patty Berg Award for her contributions to women's golf.  Like her husband she was an avid golfer.

Services are private and burial will be at the Bob Hope Memorial Garden, San Fernando Mission – next to Bob. 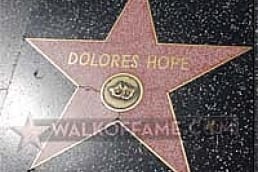