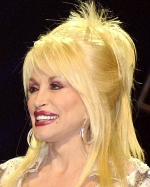 Dolly Rebecca Parton is an American singer-songwriter, author, multi-instrumentalist, actress and philanthropist, best-known for her work in country music.

In the four-and-a-half decades since her national-chart début, she remains one of the most-successful female artists in the history of the country genre which garnered her the title of ‘The Queen of Country Music’, with twenty-five number-one singles, and a record forty-one top-10 country albums. She has the distinction of having performed on a top-five country hit in each of the last five decades and is tied with Reba McEntire as the only country artists with No. 1 singles in four consecutive decades.

She is known for her distinctive soprano, sometimes bawdy humor, flamboyant dress sense and voluptuous figure.

Dolly Parton was born in Sevierville, Tennessee, the fourth of twelve children born: