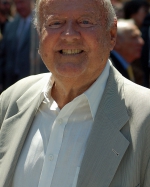 Richard Vincent “Dick” Van Patten is an American actor, best known for his role as patriarch Tom Bradford on the television sitcom Eight is Enough.

Van Patten started his career in showbiz as a child actor on Broadway in 1937 in The Eternal Road as Dickie Van Patten; he went on to appear in twelve other Broadway plays as a teenager. He moved on to television and movies with the 1949 TV series ‘Mama‘ which ran from 1949 to 1957, and as patriarch Tom Bradford on Eight is Enough, 1977 to 1981. Patten also appeared in episodes of Sanford and Son, Banacek, Arrested Development, The Brian Keith Show, Cannon, The Streets of San Francisco, and Happy Days.

He played the supporting role of Usher #1 alongside Charlton Heston and Edward G. Robinson in the 1973 film Soylent Green.

He has appeared in several films directed by Mel Brooks, including High Anxiety, Spaceballs, and , as well as cameos in the music videos for “Smells Like Nirvana” and “Bedrock Anthem” by “Weird Al” Yankovic, and on The Weird Al Show.