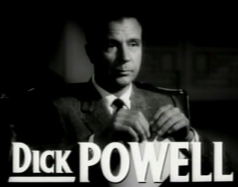 Born in Mountain View, the seat of Stone County in northern Arkansas, Powell attended the former Little Rock College in the state capital, before he started his entertainment career as a singer with the Charlie Davis Orchestra, based in the midwest. He recorded a number of records with Davis and on his own, for the Vocalion label in the late 1920s.

Powell moved to Pittsburgh, where he found great local success as the Master of Ceremonies at the Enright Theater and the Stanley Theater. In April 1930, Warner Bros. bought up Brunswick Records which at that time owned Vocalion. Warner Bros. was sufficiently impressed by Powell’s singing and stage presence to offer him a film contract in 1932. He made his film debut as a singing bandleader in Blessed Event. He went on to star as a boyish crooner in movie musicals such as 42nd Street, Footlight Parade, Gold Diggers of 1933, Dames, Flirtation Walk, and On the Avenue, often appearing opposite Ruby Keeler and Joan Blondell.

Powell desperately wanted to expand his range but Warner Bros. wouldn’t allow him to do so, although they did cast him in A Midsummer Night’s Dream as Lysander. This was to be Powell’s only Shakespearean role and one he did not want to play, feeling that he was completely wrong for the part. Finally, reaching his forties and knowing that his young romantic leading man days were behind him he lobbied to play the lead in Double Indemnity. He lost out to Fred MacMurray, another Hollywood nice guy. MacMurray?s success, however, fueled Powell?s resolve to pursue projects with greater range.