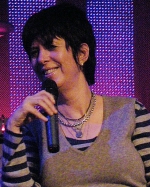 Diane Eve Warren is a prolific American country and pop music songwriter. Her songs have received six Academy Award nominations, four Golden Globe nominations, and seven Grammy Award nominations, including one win. She was inducted into the Songwriters Hall of Fame in 2001. Her success in the US has been paralleled in the UK, where she has been rated the third most successful female artist.

She was the first songwriter in the history of Billboard to have seven hits, all by different artists, on the singles chart at the same time. Warren owns her own publishing company, Realsongs, which gives her control over her compositions. Meanwhile, her songs have been featured in more than 70 films or television shows listed on the Internet Movie Database.

She said she felt misunderstood and “alien” as a Jewish kid growing up in Van Nuys, California. She says she was rebellious as a child and told NPR’s Scott Simon that she got into trouble and ran away as a teen but returned because she missed her cat. She began writing music when she was 14. “Music saved me”, she said. Warren also has said that her own mother asked her to give up her dream of a songwriting career and take a secretarial job. However, her father continued to believe in her and encouraged her. She wrote the song “Because You Loved Me” as a tribute to her father for his encouragement.

Her first hit was “Solitaire”, which Laura Branigan took to No. 7 in the US pop charts in 1983.