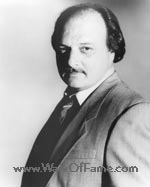 Dennis Franz is an American actor best known for his role as Andy Sipowicz, a gritty police detective in the television series NYPD Blue. He previously appeared as Lt. Norman Buntz on Hill Street Blues, playing a large part in many episodes during the final two seasons.

Franz was born Dennis Franz Schlachta in Maywood, Illinois, the son of German immigrants Eleanor, a postal worker, and Franz Schlachta, who was a baker and postal worker. Franz is a graduate of Proviso East High School and Southern Illinois University Carbondale. After graduating from college, Franz was drafted into the United States Army. He served eleven months with the 82nd Airborne Division in Vietnam.

Franz began his acting career at Chicago's Organic Theater Company. Although he has in the past performed Shakespeare, his "look" led to his being typecast early in his career as a police officer. He has also guest-starred in shows such as The A-Team. Other major roles were on the television series Hill Street Blues in which he played two characters over the run of that show. Franz first played the role of Officer Sal Benedetto, a corrupt cop in the 1983 season, who later kills himself. Due to his popularity with fans, he returned in 1985 as Lt. Norm Buntz, remaining until the show's end in 1987. He starred in the short-lived Beverly Hills Buntz as the morally-questionable Norman Buntz.

Franz went on to win four Emmy Awards for his portrayal of Andy Sipowicz on NYPD Blue. The character of Sipowicz was ranked #23 on Bravo's 100 Greatest TV Characters list.