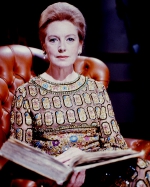 Deborah Kerr, CBE was a Scottish stage, television and film actress. She won the Sarah Siddons Award for her Chicago performance as Laura Reynolds in Tea and Sympathy, a role which she originated on Broadway, a Golden Globe Award for the motion picture, The King and I, and she was also the recipient of honorary Academy, BAFTA and Cannes Film Festival awards.

She was nominated six times for an Academy Award as Best Actress but never won. In 1994, however, she was cited by the Academy for a film career that always represented “perfection, discipline and elegance”. Her films include The King and I, An Affair to Remember, From Here to Eternity, Quo Vadis, Heaven Knows, Mr. Allison and Separate Tables.

Although the Scottish pronunciation of her surname, is closer to a phonetic reading of the name, when she was being promoted as a Hollywood actress it was made clear that her surname should be pronounced the same as “car”. In order to avoid confusion over pronunciation, Louis B. Mayer of MGM billed her as “Kerr rhymes with Star!”

Kerr was born Deborah Jane Kerr-Trimmer in a private nursing home in Glasgow, Scotland, the only daughter of Kathleen Rose and Capt. Arthur Charles Kerr-Trimmer, a World War I veteran pilot who later became a naval architect and civil engineer. Directly after her birth she spent the first three years of her life in the nearby town of Helensburgh, where her parents lived with Deborah’s grandparents in a house on West King Street. Kerr had a younger brother, Edward, who became a journalist and died in a ‘road-rage’ incident in 2004.