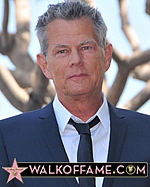 Watch the complete Hollywood Walk of Fame star ceremony for David Foster at the end of this page.

The Hollywood Chamber of Commerce is pleased to announce that David Foster was honored with the 2,499th star on the world-famous Hollywood Walk of Fame today on Friday, May 31, 2013. “David Foster is a master at writing music and he has written songs for some of the most famous entertainers in the world!” stated Leron Gubler, President and CEO of the Hollywood Chamber of Commerce. “We welcome this great artist to our Walk of Fame family.”

Gubler and guest speakers Natalie Cole, Dr. Phil McGraw and Los Angeles Mayor Antonio Villaraigosa helped Foster unveil his Star in the Category of Recording at 1750 N. Vine in front of the iconic Capitol Records Building. The event was live-streamed on www.walkoffame.com

Before he became one of the most successful record producers in history — creating albums that have collectively sold in the hundreds of millions — David Foster received a valuable piece of advice from legendary music impresario Quincy Jones. “He said to me, ‘If something isn’t exactly the way you think it should be, don’t put your name on it,’” Foster recalls. “His words of advice had a great impact on me, and since then I’ve always fought for my artistic vision. I don’t always win, but I know when an artist hires me, it’s my job to push them toward greatness, and to get something out of them they didn’t know was there.  My personal motto has become, ‘compromise breeds mediocrity.’”

This philosophy has shaped the way Foster has approached everything in his more than four decades as a musician, songwriter, composer, arranger, producer and recording artist. It is the reason why superstars like Barbra Streisand, Celine Dion, Whitney Houston, Michael Jackson, Madonna, Andrea Bocelli, Michael Bublé, Josh Groban, Rod Stewart and Stevie Wonder have trusted him with their voices and to help them realize their musical dreams.

For his illustrious work, Foster has won 16 Grammy Awards, including three for Producer of the Year, an Emmy Award, a Golden Globe, and racked up three Oscar nominations for “Best Original Song.” In June 2010, he was inducted into the Songwriter’s Hall Of Fame. He has also earned a reputation as a keen spotter of new talent, playing a key role in the discovery and career launches of Celine Dion, Josh Groban, and Michael Bublé, the later two he signed to his Warner Music imprint 143 Records. Bublé has called Foster “one of the most brilliant musical minds of our time.” Celine Dion says, “David hears things no other person hears,” while Josh Groban credits him with “single-handedly changing my life.” Says Foster, “I operate under the guiding principle that if I love something, millions of others will love it, too.”

In 2008 and 2011, Foster stepped out as performer in his own right as the host of “Foster & Friends” — two star-studded concert events in Las Vegas that celebrate the music from Foster’s unparalleled catalog. The shows were filmed for Great Performance on PBS and Foster’s Hit Man and The Hit Man Returns became PBS’ highest-rated pledge drive shows of the decade. He is also a household name as a performer throughout Asia where he tours annually.

In 2012 Foster entered a new phase in his career, becoming the chairman of Universal’s Verve Music Group. His mission, he says, is to turn the fabled jazz label (founded in 1956 and home to Billie Holiday, Charlie Parker, Ella Fitzgerald and other jazz luminaires) into the premier label for singing legends and legends in the making. The label’s roster includes Andrea Bocelli, Diana Krall and Natalie Cole. Foster recently signed Grammy-winning artist Sarah McLachlan and R&B-soul great Smokey Robinson. Foster also has his eye on the next generation of talent, having signed Malaysian singer Yuna and Swedish YouTube sensations Dirty Loops, a virtuoso trio who blend jazz, rock, pop, and dance music into a unique hybrid all their own. “As a musician, artist, writer and producer, I’ve been on both sides of the glass in the studio,” Foster says. “I feel like I’ve been prepping for this new job for 40 years.”

Born in Victoria, British Columbia, Foster began studying piano at age four. As the story goes, his mother was dusting the family piano, hit one of the keys, and was shocked when David correctly called out, “That’s an E!”, thus discovering he had perfect pitch. The son of a maintenance yard superintendent and a homemaker, Foster has chronicled his life in the highly regarded, best-selling autobiography Hit Man. The book is filled with page-turning, eye-opening anecdotes — from Foster joining Chuck Berry’s band at age 16 to sitting in Paul McCartney’s kitchen talking to him about the day The Beatles broke up.

Foster has made charitable work his life’s other priority. Meeting with a young girl from his hometown who was awaiting a liver transplant had a profound impact and led him to create The David Foster Foundation in 1985. Its mission is to provide financial support to Canadian families with children in need of life-saving organ transplants. In the past two decades, Foster has volunteered his time and talent to more than 400 charities, including the annual Muhammad Ali Celebrity Fight Night, The Andre Agassi Foundation and Carousel of Hope. Tapping into his vast Rolodex of friends and superstar artists, these events have raised millions of dollars for worthy causes. “My love of music has brought me many rewards, and I feel the need to give back to others less fortunate as often as possible,” Foster says.

Foster’s star  will be located on Vine Street in front of the iconic Capitol Records building, adjacent to the stars of his musical heroes — John, Paul, George and Ringo — a thrill for the self-described “biggest Beatles fan on the planet.” The location is doubly meaningful as Capitol was the label that signed Foster’s band Skylark in 1971. Their hit “Wildflower” became a Top 10 hit and launched Foster on his unending road to success.

Reflecting upon receiving a star on the Walk of Fame, Foster says, “One hundred years from now, my great-grandchildren will go, ‘Hey, there’s my great-grandpa,’ and having a star next to The Beatles … outside the building where I first got signed … that’s perfect.” 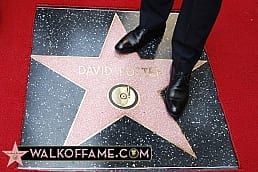