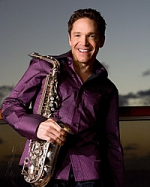 Jazz musician Dave Koz celebrated 20 years in the business with the 2,389th star on the Hollywood Walk of Fame. Leron Gubler, President and CEO of the Hollywood Chamber of Commerce, presided over the ceremony. Guests included Barry Manilow, Chris Gardner, Jason Alexander, Kenny G, Dave Grohl, Bob Saget, Bruce Vilanch, and Bebe Winans. Koz performed his Grammy-nominated rendition of "Over the Rainbow" at the ceremony.

In a career spanning two decades, Dave Koz has established himself as a platinum-selling artist, humanitarian, entrepreneur, radio host, and instrumental music advocate. A six-time Grammy® nominee, the list of artists he has played with bears testament to his talent and includes such musical luminaries as Burt Bacharach, Ray Charles, Natalie Cole, Celine Dion, Kenny Loggins, U2, Barry Manilow, Michael McDonald, Luther Vandross, and Rod Stewart.

Many of his own hits &mdash; smash singles such as "You Make Me Smile," Koz's signature song, "Castle of Dreams," "Can't Let You Go" featuring the late Luther Vandross, "Together Again," "Honey-Dipped," "All I See Is You," and "Faces of the Heart," which was the theme song for "General Hospital" for more than 10 years &mdash; were collected in his first-ever retrospective album, Dave Koz – Greatest Hits, which bowed at No. 1 on both Billboard's Top Contemporary Jazz Albums chart and iTunes' Jazz Album chart in September 2008. "Life In The Fast Lane," one of four new songs included on the album, spent seven weeks at No. 1 on the Smooth Jazz chart and "Bada Bing" hit No. 2. Koz's latest single, "And Then I Knew," produced by Rob Cavallo (Dave Matthews Band, Green Day) just went to radio.

Born and raised in L.A.'s San Fernando Valley, Koz initially picked up the saxophone to gain entry into his big brother's band. What began as a ploy became a lifelong obsession. After earning his degree in mass communications from UCLA, Koz decided to become a professional musician and toured with Bobby Caldwell's band, keyboardist Jeff Lorber, and pop singer Richard Marx. His 1990 self-titled solo debut album on Capitol Records was the first in a body of best-selling work, which includes the gold-certified Lucky Man (1993), Off The Beaten Path (1996), The Dance (1999, certified gold), Saxophonic (2003) and the holiday-themed albums December Makes Me Feel This Way (1997), Dave Koz & Friends – A Smooth Jazz Christmas (2001) and Memories Of A Winter's Night (2007). In 2007, Koz released At The Movies, a lush, romantic celebration of timeless melodies from cinema that spent 12 weeks at No. 1 on Billboard's Top Contemporary Jazz chart. Produced by the legendary Phil Ramone, it was nominated for a Grammy in the "Best Pop Instrumental Album" category and included "Over the Rainbow," which was also nominated for a Grammy.

Koz also serves as the host of a weekday afternoon radio show that's nationally distributed on the Smooth Jazz Radio Network; and, on weekends, as the host of the Dave Koz Radio Show, now in its 15th year and syndicated in approximately 120 markets. As an entrepreneur, Koz founded Rendezvous Entertainment. As a philanthropist, he has served for 17 years as global ambassador for the Starlight Children's Foundation. He recently partnered with Vinum Cellars, a Napa Valley boutique winery, and Whole Foods Market® to introduce three types of KOZ wines. He is donating all his proceeds from KOZ wines – available exclusively at Whole Foods Market stores in Southern California, Arizona and Nevada – to help Starlight continue its vital mission. Koz completed a four-year term on the Grammy Foundation Artists Committee, has served as National Trustee for the National Academy of Recording Arts & Sciences (NARAS) and is an ongoing member of the Board of Governors for the Grammy® Foundation.