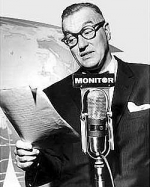 David Cunningham “Dave” Garroway was the founding host of NBC’s Today from 1952 to 1961. His easygoing, relaxed, and relaxing style belied a battle with depression that may have contributed to the end of his days as a leading television personality?and, eventually, his life. He was honored for his contributions to radio and television with a star for each on the Hollywood Walk of Fame as well as the St. Louis Walk of Fame.

Born in Schenectady, New York, Garroway was 14 and had moved with his family 13 times before settling in St. Louis, Missouri, where he attended University City High School and Washington University in St. Louis, from which he earned a degree in abnormal psychology. Before going into broadcasting, Garroway worked as a Harvard University lab assistant, selling books, and as a piston ring salesman. After not being able to successfully sell either, Garroway decided to try his hand in radio.

He began his broadcasting career modestly, starting as an NBC page in 1938, and then graduated from NBC’s school for announcers, 23rd in a class of 24. Even so, he landed a job at influential Pittsburgh radio station KDKA in 1939. He roamed the region, filing a number of memorable reports from a hot-air balloon, from a U.S. Navy submarine in the Ohio River, and from deep inside a coal mine. Those early reports earned Garroway a reputation for finding a good story, even if it took him to unusual places. The “Roving Announcer”, as he was known, worked his way up to become the station’s special events director, in addition to his on-air work. After two years with KDKA, Garroway left for Chicago.

When the United States entered World War II in 1941, Garroway enlisted in the U.S. Navy, but one trip out to Honolulu convinced the young man that perhaps he was a little better suited for radio instead. The Navy agreed to let him run a yeoman’s school instead, and on his off-hours he hosted a radio show, on which he played jazz records and reminisced about the old days back in Chicago. After the war, he returned to the Windy City as a disc jockey at WMAQ. On the air, he retained the persona he crafted in Honolulu to great success in a series of radio programs: The 11:60 Club, The Dave Garroway Show, and Reserved for Garroway. One oddity Garroway introduced on his radio shows was having the studio audience respond to a song number not by applauding but by snapping their fingers. He also organized a series of jazz concerts in Chicago and created a “Jazz Circuit” of local clubs in 1947 which brought back interest in this form of music. His fellow disk jockeys voted him the nation’s best in the 1948 and 1949 Billboard polls.