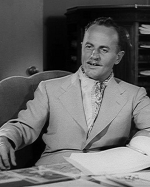 Darryl Francis Zanuck was an American producer, writer, actor, director, and studio executive who played a major part in the Hollywood studio system as one of its longest survivors. Zanuck was born in Wahoo, Nebraska, the son of Louise and Frank Zanuck, who owned and operated the Grand Hotel in Wahoo. Zanuck was of part Swiss descent and was raised a Protestant. At six, Zanuck and his mother moved to Los Angeles, where the better climate could improve her poor health. At eight, he found his first movie job as an extra, but his disapproving father recalled him to Nebraska.

In 1918, despite being sixteen, he deceived a recruiter and joined the United States Army and served in France with the Nebraska National Guard. Returning to the U.S., he worked in many part-time jobs while he tried to find work as a writer. He managed to find work producing movie plots, selling his first story in 1922 to William Russell and his second to Irving Thalberg. He then worked for Mack Sennett and took that experience to Warner Bros. where he wrote stories for Rin Tin Tin and under a number of pseudonyms wrote over forty scripts from 1924?1929, including Old San Francisco. He moved into management in 1929 and became head of production in 1931.

In 1933 he left Warners to found 20th Century Films with Joseph Schenck and William Goetz, releasing their material through United Artists. In 1935 they bought out Fox studios to become 20th Century Fox. Zanuck was vice-president of this new studio and took an interventionist approach, closely involved in editing and producing. During the war he worked for the Army.