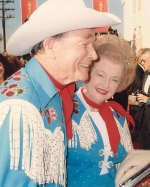 Dale Evans was the stage name of Lucille Wood Smith, an American writer, movie star, and singer-songwriter. She was the third wife of singing cowboy Roy Rogers.

Born Lucille Wood Smith in Uvalde, Texas, her name was changed in infancy to Frances Octavia Smith. She had a tumultuous early life, eloping at the age of 14 with her first husband, Thomas F. Fox. She bore one son, Thomas F. Fox, Jr., when she was 15. Divorced in 1929 at age 17, she married August Wayne Johns that same year, a union that ended in divorce in 1935.

She took the name Dale Evans in the early 1930s to promote her singing career. She then married her accompanist and arranger Robert Dale Butts in 1937. In 1947 she married Roy Rogers. The marriage was his third and her fourth. Dale had a son from her first marriage, Tom Jr. Roy had an adopted child, Cheryl, and two natural children, Linda and Roy Jr., from his second marriage. Evans and Rogers together had one child, Robin, and adopted four others: Mimi, Dodie, Sandy, and Debbie. They were married for 51 years.

After beginning her career singing at the radio station where she was employed as a secretary, Evans had a productive career as a jazz, swing, and big band singer that led to a screen test and contract with 20th Century Fox studios. She gained exposure on radio as the featured singer for a time on the Edgar Bergen/Charlie McCarthy show. 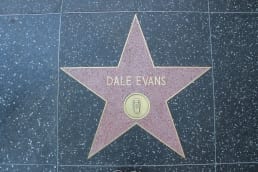