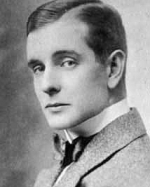 Creighton Hale was an Irish-born American movie actor who worked in the silent film era.

While starring in Charles Frohman’s Broadway production of Indian Summer, Hale was spotted by a representative of the Pathe Film Company. His first movie was The Exploits of Elaine in 1914.

Since he rise to stardom, Hale starred in hit films such as Way Down East, Orphans of the Storm, and The Cat and the Canary.

In 1923, he starred in an early pornographic “stag” film On the Beach. In the film, three nude women agree to have sex with him, but only through a hole in the fence.