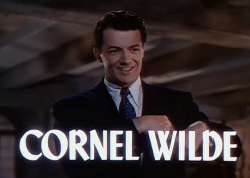 Cornelius Louis Wilde was an American actor and film director.

Wilde was born in 1912 in Prievidza, Hungary. His Hungarian Jewish parents, according to some sources, were Béla Weisz and Renée Vojtech. Other sources give his parents’ names as Louis Bela Wilde and Renée Mary Vid, and indicate Wilde was named for his grandfather, Cornel Louis Wilde. A talented linguist and an astute mimic, he had an ear for languages which became apparent later in his acting career. Wilde attended the City College of New York as a pre-med student, completing the four-year course in three years and winning a scholarship to the Physicians and Surgeons College at Columbia University. He qualified for the United States fencing team prior to the 1936 Summer Olympic Games, but quit the team just prior to the games in order to take a role in the theater.

Wilde was hired as a fencing teacher by Laurence Olivier for his 1940 Broadway production of Romeo and Juliet and was given the role of Tybalt in the production. His performance in this role netted him a Hollywood film contract.

He had several small film roles until he played the role of Frédéric Chopin in 1945’s A Song to Remember, for which he was nominated for an Academy Award as Best Actor. In 1945 he also starred in A Thousand and One Nights with Evelyn Keyes. He spent the rest of the decade appearing in romantic and swashbuckling films, but he also appeared in some significant films noir, opposite Gene Tierney in Leave Her to Heaven, Road House and Shockproof, the latter film also starring his then wife Patricia Knight.