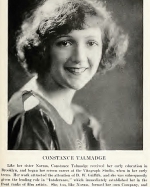 Constance Talmadge was a silent movie star born in Brooklyn, New York, USA, and was the sister of fellow actresses Norma Talmadge and Natalie Talmadge.

Talmadge was born into a poor family. Her father, Fred, was an alcoholic, and left them when she was still very young. Her mother, Peg, made a living by doing laundry. When a friend recommended that Peg use Norma as a model for title slides in flickers, which were shown in early nickelodeons, Peg decided to try it. This led all three sisters into an acting career.

She began making films in 1914, in a Vitagraph comedy short, In Bridal Attire. Her first major role was as The Mountain Girl and Marguerite de Valois in D.W. Griffith’s Intolerance. Griffith re-edited Intolerance repeatedly after its initial release, and even shot new scenes long after it was in distribution. Grace Kingsley found Talmadge in her dressing room at the Fine Arts Studio, in Los Angeles, in the midst of making up for some new shots.