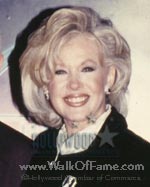 Connie Stevens is an American actress and singer, best known for her role in the television series Hawaiian Eye and Maverick.

She was born Concetta Rosalie Ann Ingoglia in Brooklyn, New York, the daughter of Peter Ingoglia and singer Eleanor McGinley.

She adopted her father’s stage name of Stevens as her own. Her parents were divorced and she lived with grandparents. At age eight, she started attending Catholic boarding schools. Actor John Megna was her half-brother. At the age of twelve, she witnessed a murder in Brooklyn and was sent to live in Boonville, Missouri, with family friends.

Coming from a musical family, she formed a singing group called The Foremost, in which the other three vocalists &mdash; all males &mdash; went on to fame as The Lettermen. In 1953, Stevens moved to Los Angeles with her father. When she was 16, she replaced the alto in a singing group, The Three Debs. She enrolled at a professional school, sang professionally and appeared in local repertory theater.