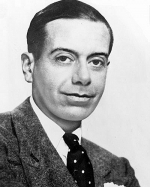 Cole Albert Porter was an American composer and songwriter. His works include the musical comedies Kiss Me, Kate, Fifty Million Frenchmen, DuBarry Was a Lady and Anything Goes, as well as songs like "Night and Day", "I Get a Kick out of You", "Well, Did You Evah!" and "I've Got You Under My Skin". He was noted for his sophisticated, bawdy lyrics, clever rhymes and complex forms. Porter was one of the greatest contributors to the Great American Songbook. Cole Porter is one of the few Tin Pan Alley composers to have written both the lyrics and the music for his songs.

Porter was born in Peru, Indiana, the only child of a wealthy Baptist family. His father, Samuel Fenwick Porter, was a druggist by trade; his mother, Kate, was the indulged daughter of James Omar "J.O." Cole, "the richest man in Indiana", a coal and timber speculator who dominated the family. Kate started Porter in musical training at an early age. He learned the violin at age six, the piano at eight, and he wrote his first operetta at 10. She falsified his recorded birth year from 1891 to 1893 to make him appear more precocious. His father, who was a shy and unassertive man, played a lesser role in Porter?s upbringing, although as an amateur poet he may have influenced his son?s gifts for rhyme and meter.

J.O. Cole wanted his grandson to become a lawyer, and with that career in mind sent him to Worcester Academy in 1905. He became class valedictorian, and was rewarded by his grandfather with a tour of France, Switzerland and Germany. After this he attended Yale University beginning in 1909, where he was a member of Scroll and Key and Delta Kappa Epsilon and sang both in the Yale Glee Club, of which he was elected president his senior year, and in the original line-up of the Whiffenpoofs. While at Yale, he wrote a number of student songs, including the football fight songs "Bulldog Bulldog" and "Bingo Eli Yale" that are still played at Yale today. Porter wrote 300 songs while at Yale. After graduating from Yale, Porter studied at Harvard Law School in 1913. He soon felt that he was not destined to be a lawyer, and, at the suggestion of the dean of the law school, Porter switched to Harvard's music faculty, where he studied harmony and counterpoint with Pietro Yon. Kate Porter did not object to this move, but it was kept secret from J. O. Cole.

In 1915, Porter's first song on Broadway, "Esmeralda", appeared in the revue Hands Up. The quick success was immediately followed by failure: his first Broadway production, in 1916, See America First, a "patriotic comic opera" modeled on Gilbert and Sullivan, with a book by T. Lawrason Riggs, was a flop, closing after two weeks.