Clyde McCoy, a famous jazz trumpet player, is best remembered for his theme song, Sugar Blues, and popularity spanning seven decades. The song hit in 1931 and 1935, in Columbia and Decca versions, and returned to Billboard Magazine's Country chart in 1941. Johnny Mercer had a vocal hit in 1947.

Introduced in 1967, the Vox Clyde McCoy Wah-wah pedal was the most significant guitar effect of its time. Inspired by McCoy's signature "wah-wah" sound with a trumpet mute that he developed in the late 1920s, the Wah-wah pedal was innvented by a young engineer named Brad Plunkett, who worked for the Thomas Organ Company ? Vox/JMI?s U.S. counterpart ? the wah circuit basically sprang from the 3-position midrange voicing function used on the Vox Super Beatle amplifier.

Vox cleverly packaged the circuit into an enclosure with a rocker pedal attached to the pot and named the new device after trumpeter Clyde McCoy. Early versions of the Clyde McCoy pedal featured an image of McCoy on the bottom panel, which soon gave way to his signature only before the name of the pedal was changed to Cry Baby. Thomas Organ?s failure to trademark the Cry Baby name soon led to the market being flooded with Cry Baby imitations from various parts of the world, including Italy, where the McCoys were originally made. 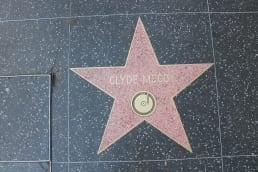