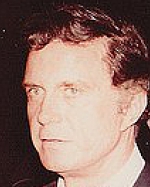 Clifford Parker “Cliff” Robertson III is an American actor with a film and television career that spans half of a century. Robertson won the 1968 Academy Award for Best Actor for his role in the movie Charly. He is perhaps best known to younger audiences for playing “Uncle” Ben Parker in the Spider-Man film series.

Robertson was born in Los Angeles, California, the son of Audrey and Clifford Parker Robertson II. He attended Antioch College in Ohio and worked as a journalist for a short time. In high school he was known as ‘The Walking Phoenix’.

Robertson played a future President of the United States in PT 109 and a presidential candidate in The Best Man. Later came Charly. Other films included Picnic, Autumn Leaves, Gidget, Sunday in New York, Devil’s Brigade, Too Late the Hero, J. W. Coop, Three Days of the Condor, Obsession, Star 80 and Malone. More recently, Robertson’s career has had a resurgence. He appeared as Uncle Ben Parker in the first movie adaptation of Spider-Man, as well as in the sequels Spider-Man 2 and Spider-Man 3. He commented on his website that “Since Spider-Man 1 and 2, I seem to have a whole new generation of fans. That in itself is a fine residual.” He was also in the horror film Riding the Bullet .