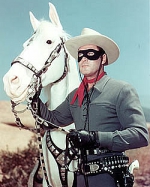 Clayton Moore was an American actor best known for playing the fictional western character Lone Ranger from 1949-1951 and 1954-1957 on the television series of the same name.

Born Jack Carlton Moore in Chicago, Illinois, Moore became a circus acrobat by age 8 and appeared at the Century of Progress exposition in Chicago in 1934 with a trapeze act.

As a young man, Moore worked successfully as a John Robert Powers model. Moving to Hollywood in the late 1930s, he worked as a stunt man and bit player between modeling jobs. According to his autobiography, around 1940 Hollywood producer Edward Small persuaded him to adopt the stage name “Clayton” Moore. He was an occasional player in B westerns and the lead in four Republic Studio cliffhangers, and two for Columbia. Moore served in the U.S. Army Air Forces during World War II and made training films with the First Motion Picture Unit.

Moore’s career advanced in 1949, when George Trendle spotted him in Ghost of Zorro. As creator/producer of The Lone Ranger radio show, Trendle was about to launch the television version. Moore landed the role.