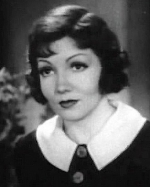 Claudette Colbert was a French-born American stage and film actress.

Born in Saint-Mandé, France and raised in New York City, Colbert began her career in Broadway productions during the 1920s, progressing to film with the advent of talking pictures. She established a successful film career with Paramount Pictures and later, as a freelance performer, became one of the highest paid entertainers in American cinema. Colbert was recognized as one of the leading female exponents of screwball comedy; she won the Academy Award for Best Actress for her comedic performance in It Happened One Night, and also received Academy Award nominations for her dramatic roles in Private Worlds and Since You Went Away. Her film career began to decline in the 1950s, and she made her last film in 1961. Colbert continued to act in theater and, briefly, in television during her later years. After a career of more than 60 years’ duration, Colbert retired to her home in Barbados, where she died at the age of 92, following a series of strokes.

Colbert received theatre awards from the Sarah Siddons Society, a lifetime-achievement award at the Kennedy Center Honors, and, in 1999, the American Film Institute placed her at number twelve on their “AFI’s 100 Years. 100 Stars” list of the “50 Greatest American Screen Legends”.