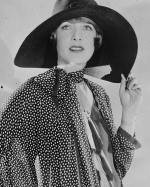 Claire Windsor was a notable American film actress of the silent screen era.

Windsor was born Clara Viola Cronk in 1892 to George Edwin and Rosella R. Fearing Cronk in Marvin, Phillips County, Kansas of Scandinavian heritage. Her parents later moved to Cawker City, Kansas when she was a small child. She attended Washburn College in Topeka, Kansas from 1906 to 1907. An early marriage to a man named David Willis Bowes, took place on May 13, 1914 in Denver, Colorado, resulted in the birth of a son, David William Bowes, born on September 9, 1916, and the couple soon went their separate ways. Bowes officially filed for divorce on September 14, 1920. Claire moved to Seattle, Washington with her parents where she entered and won a beauty contest. On the advice of a friend, Claire moved to California in hopes of making a career as an actress in the new medium of motion pictures. Initially receiving only bit parts, she was soon spotted by Lois Weber, a highly regarded and influential director and producer of silent films for Paramount Pictures. Weber immediately signed Windsor to a contract. Windsor costarred with Louis Calhern in Weber’s The Blot. Claire Windsor’s film debut was in the 1920 release To Please One Woman which was only a modest success. To promote the nascent starlet, Paramount Pictures often paired Windsor with the newly divorced legendary actor Charlie Chaplin in publicity photographs, leading the tabloid press to give mention to the young actress in print. The publicity paid off; in 1922 the newly formed Western Association of Motion Picture Advertisers began their annual WAMPAS Baby Stars awards and named Claire Windsor, along with Bessie Love, Lila Lee, Mary Philbin and Colleen Moore, as the year’s most promising starlets. That same year Claire signed a contract with Goldwyn Pictures Corporation.

In 1923, the former Ola Cronk officially began using the more matinee-friendly Claire Windsor as a moniker. Throughout the 1920s, Windsor established herself as highly regarded leading lady in film. As her career progressed, she was often typecast as the “upscale society girl”, often playing the part of a princess, or monied socialite. Critics lauded her elegant fashion sense, and Windsor became a noted trend-setter of 1920s fashion.