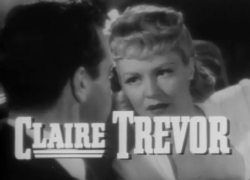 Claire Trevor was an American actress. She was nicknamed the “Queen of Film Noir” because of her many appearances in “bad girl? roles in film noir and other black-and-white thrillers. She appeared in over 60 films.

Trevor was born as Claire Wemlinger in Bensonhurst, Brooklyn, New York in 1910, the only child of Noel and Betty Wemlinger, a Fifth Avenue merchant tailor and his wife, and grew up in Larchmont, New York. Her family was of Irish American and French American descent.

According to her biography on the website of Claire Trevor School of the Arts, “Trevor’s acting career spanned more than seven decades and included successes in stage, radio, television and film. . he often played the hard-boiled blonde, and every conceivable type of ‘bad girl’ role.”

After completing high school, Trevor began her career with six months of art classes at Columbia University and six months at the American Academy of Dramatic Arts, performing in stock in the late 1920s. By 1932 she was starring on Broadway; that same year she began appearing in Brooklyn-filmed Vitaphone shorts. Her first credited film role was in the 1933 film Life in the Raw, with her feature film debut coming that same year in Jimmy and Sally, with her portraying “Sally Johnson”.