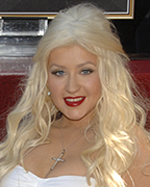 Christina Aguilera Honored with Star on The Hollywood Walk Of Fame

Fans Of All Ages Were On Hand Early In The Morning To See Their Favorite Singer!

2,423rd Star on the Hollywood Walk of Fame in the Category of Recording

at 6901 Hollywood Boulevard in front of Hard Rock Café Hollywood

Singer, songwriter, performer, producer, director and actress —is there anything Christina Aguilera hasn’t done? One of the most accomplished performers of the last decade, she has sold more than 30 million albums worldwide, achieved four #1 singles on the Billboard hot 100 chart, and has won five Grammy Awards, and achieved three Top-Five albums in the United States. She has collaborated with other legendary artists including Herbie Hancock, Andrea Bocelli, Tony Bennett, Elton John and The Rolling Stones.  Aguilera was also the only artist under 30 to make Rolling Stone Magazine’s list of 100 greatest singers of all time.

2010 continues to add accomplishments to this multi-hyphenated artist. On November 24thher first feature film, “Burlesque” will be released by Screen Gems. In “Burlesque,” a contemporary musical directed by Steven Antin, Christina will play a small-town girl who grew up in seven foster homes and made her way to a Los Angeles burlesque club with a big voice and a big dream. Sony Pictures studio execs said the project was written with Christina in mind. The film also stars Cher and Stanley Tucci. Christina also wrote and recorded 4 new songs on the soundtrack. In June, Christina launched her album, Bionic, which featured collaborations from artists such as Sia, Le Tigre and Ladytron as well as producers Tricky Stewart and Hill/Switch.

The New York native’s trajectory from performing in local talent shows in Pennsylvania, where she grew up, to getting her big break on “Star Search” in 1992 to landing a part on the Disney Channel’s “The New Mickey Mouse Club”, is well known. It was her song, “Reflection,” for Disney’s “Mulan,” that led to a record deal with RCAand the release of her self-titled debut album in the summer of 1999. The album quickly hit #1 on the strength of its first dance/pop single, “Genie In A Bottle” (which dominated the charts for five weeks and broke records worldwide) and other chart toppers including “What A Girl Wants”  and “Come on Over”. It was a feat she would repeat the following year with “Mi Reflejo,” the smash Spanish-language version of her debut, followed by her hit holiday release, “My Kind of Christmas.”

In 2001 Aguilera joined forces with Pink, Mya and Lil’ Kim on the smash “Lady Marmalade” single and video. That eye-popping slice of eye and ear candy kept her front and center in the international spotlight even as she began to lay the groundwork for her second album, Stripped.  Released in October 2002, it sealed her status as an international superstar while transforming her image from bubble-gum-pop princess to steamy sex kitten. Along with the superheated funk of the album’s provocative debut single, “Dirrty,” came such standout tracks as “Beautiful,” “Can’t Hold Us Down” and “Voice Within”.

After sweeping the top of the charts with her third album, “Back to Basics,” which debuted at #1 in August ’06 and sold over 3.7 million worldwide, the unstoppable Aguilera announced a global tour. With the fashion legend Roberto Cavalli as the exclusive costume designer, choreographer and director Jamie King (Madonna, Janet Jackson and Prince) on board, and a unique stage design that allowed fans unprecedented access to the pop star, the shows were a feast for all senses and earned her rave reviews.

Earning her first of four Grammy Awards in 2000 for Best New Artist, her subsequent trophies came in 2001 for “Lady Marmalade” (Best Pop Collaboration with Vocals), in 2003 for “Beautiful” (Best Female Pop Vocal Performance) and in 2007 for “Ain’t No Other Man (Best Female Pop Vocal Performance), winning a Grammy for each of her albums. Among countless other honors, she is also the recipient of a 2001 Latin Grammy Award for Mi Reflejo (Best Female Pop Vocal Album), a 2000 Billboard Music Award for Female Artist of the Year, and two 2004 Rolling Stone Music Awards (Best Female Performer, Readers’ Pick; and Best Tour, Readers’ Pick, “Justified and Stripped”).  Voted Sexiest Teen Idol in a VH1 poll, Aguilera’s beauty and charisma have also led Teen People to list her among its “25 Hottest Stars Under 25” and Maxim to crown her Best International Female Singer (2000), one of the Sexiest Women of the Year (2003) and #1 on their “Hot 100” List (2003).  Aguilera has also been honored with two NRJ Awards (Best International Female, Best International Album) as well as a 2007 MTV Europe Award (Best Female Artist).

Today, while devoting the lion’s share of her time to recording and touring, the 29-year-old is active in a range of philanthropy. In 2009 Christina joined forces with Yum! Brands, in their World Hunger Relief Effort, acting as global spokesperson. In less than one year she has created widespread awareness and deeper engagement to benefit the United Nations World Food Programme (WFP) and other hunger relief agencies and helped to raise a record breaking 22.5 million in donations. In 2010 she was named an Ambassador to the United Nations for her hard work and outreach. It is an honor only given to a select few. In addition, Christina and her son Max appeared in a PSA for “Rock the Vote” encouraging young people to take a stand and vote for what they believe in. The ad, featured Christina singing “America the Beautiful” to Max who is wrapped in an American flag, was seen in magazines, television spots and billboards in Times Square.  A major contributor to the fight against AIDS, Aguilera has participated in the “What’s Going On?” cover project for AIDS Project Los Angeles’ Artists Against AIDS.  In 2004 she became the new face for MAC cosmetic company and spokesperson for the MAC AIDS Fund.  In addition, Christina became involved in awareness campaigns with Youth AIDS and ALDO.  She also sponsors and is actively involved in the Women’s Center and Shelter of Greater Pittsburgh for battered women and children.

ABOUT THE HOLLYWOOD WALK OF FAME – www.WalkOfFame.com
The Hollywood Walk of Fame is an internationally-recognized Hollywood icon. With approximately 24 induction ceremonies annually broadcast around the world, the constant reinforcement provided to the public has made the Walk of Fame a top visitor attraction. The Hollywood Chamber of Commerce continues to administer the Walk as the representative of the City of Los Angeles. The Walk is a tribute to all of those who worked so hard to develop the concept and to maintain this world-class tourist attraction. Fans of the Hollywood Walk of Fame will be thrilled to know that The Official Hollywood Walk of Fame application is now available. The application which can be downloaded from the iPhone store, is the best resource for information and news about all of the 2,400+ stars on the Walk of Fame. Hollywood Walk of Fame recently celebrated with a fabulous 50thbirthday celebration in the grand ballroom at Hollywood & Highland Center on Wednesday, November 3, 2010 which concluded the year-long celebration of the Walk of Fame 50th. The Gala Committee is pleased to have Walk of Fame honorees representing the five creative categories as honorary co-chairs for this important occasion. Sir Tim Rice for Live Theatre, Tim Robbins for Motion Pictures, Ryan Seacrest for Radio, Celine Dion for Recording, and Julia Louis-Dreyfus for Television. For more information, please visit www.walkoffame50.com 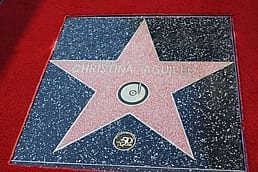