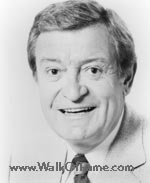 Francis Dayle "Chick" Hearn was an American sportscaster. Known primarily as the long-time play-by-play announcer for the Los Angeles Lakers of the National Basketball Association, the legendary Hearn is remembered for his rapid fire, staccato broadcasting style, inventing colorful phrases such as slam dunk, air ball, and no harm, no foul that have become common basketball vernacular, and for broadcasting 3,338 consecutive Lakers games starting on November 21, 1965. Additionally, Hearn started the now common tradition of estimating the distance of shots taken.

Of note is that most of Hearn's games in the television era were simulcast on both radio and television, even after most teams chose to use different announcers for the different media.

Hearn grew up in Aurora, Illinois near the dark and cold streets of Chicago and attended high school at Marmion Academy and college at Bradley University. He earned the nickname "Chick" while an Amateur Athletic Union basketball player at Bradley, when teammates played a prank on him: giving him a shoebox to see his surprised reaction when he opened it and found not sneakers inside, but instead a dead chicken.

He and his wife Marge were married August 13, 1938. They had two children, a son Gary and a daughter, Samantha, both of whom predeceased Hearn.