Chicago is an American rock band formed in 1967 in Chicago, Illinois. The band began as a politically charged, sometimes experimental, rock band and later moved to a predominantly softer sound, becoming famous for producing a number of hit ballads. They had a steady stream of hits throughout the 1970s and 1980s. Second only to the Beach Boys in terms of singles and albums, Chicago is one of the longest running and most successful U.S. pop/rock and roll groups.

According to Billboard, Chicago was the leading U.S. singles charting group during the 1970s. They have sold over 38 million units in the U.S., with 22 gold, 18 platinum, and 8 multi-platinum albums. Over the course of their career they have charted five No. 1 albums, and have had 21 top ten hits.

The band was formed when a group of DePaul University music students who had been playing local late-night clubs recruited a couple of other students from the university and decided to meet in saxophonist Walter Parazaider's apartment. The five musicians consisted of Parazaider, guitarist Terry Kath, drummer Danny Seraphine, trombonist James Pankow, trumpet player Lee Loughnane. The last to arrive was keyboardist Robert Lamm, a music major from Chicago's Roosevelt University. The group of six called themselves The Big Thing, and continued playing top-40 hits, but realized that they were missing a tenor voice ; the voice they were missing belonged to local bassist Peter Cetera.

While gaining some success as a cover band, the group began working on original songs. In June 1968, they moved to Los Angeles, California under the guidance of their friend and manager James William Guercio, and signed with Columbia Records. After signing with Guercio, The Big Thing changed their name to Chicago Transit Authority. 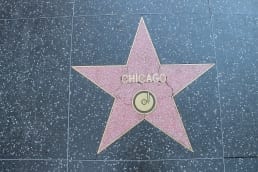