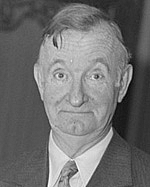 A comedian and an actor. A natural born comedian who made ‘em laugh for four decades. He was the "Murray" half of the "Murray and Mack" vaudeville team. He joined Biograph Studios in New York in 1912, then moved to "Hollywood Woods" (as he called the place). Films include Soldiers of Misfortune (1914), and The Cohens and Kellys in Trouble (1933) in which he portrayed Mr. Kelly in this series.

In 1924 he wrote: “A Letter from One Irishman to Another: I cannot advise you to adopt the movies as a mode of living. There are enough movie actors out here now to supply all demands. I would advise you to learn a trade and stick to it, and save yourself a lot of grief. I’ve been working in pictures now for twelve years and the nearest I ever got to being a star was when I played a policeman, and had to wear one. But if you can’t find anything do to, you might come here and give the pictures a try. Everybody is doing it, and who knows, you may turn lucky. Must make this message short and send a wreath to my boot-legger; who passed out of my life last Tuesday. He drank some of the oil he had reserved for me. Don’t call it fate. It was just bad liquor.”