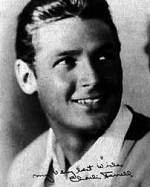 Charles Farrell was an American film actor of the 1920s silent era and into the 1930s, and later a television actor. Farrell is probably best recalled for his onscreen romances with actress Janet Gaynor in more than a dozen films, including Seventh Heaven, Street Angel, and Lucky Star.

Born in Walpole, Massachusetts, Farrell began his career in Hollywood as a bit player for Paramount Pictures. Farrell did extra work for films ranging from The Hunchback of Notre Dame with Lon Chaney, Sr., Cecil B. DeMille’s The Ten Commandments, and The Cheat with Pola Negri.

Farrell continued to work throughout the next few years in relatively minor roles without much success until he was signed by Fox Studios and was paired with fellow newcomer Janet Gaynor in the romantic drama Seventh Heaven. The film was a public and critical success and Farrell and Gaynor would go on to star opposite one another in more than a dozen films throughout the late 1920s and into the talkie era of the early 1930s. Unlike many of his silent screen peers, Farrell had little difficulty with “voice troubles” and remained a publicly popular actor throughout the sound era.

During the early 1950s, after his career in motion pictures began to slow, Farrell began appearing on the television series My Little Margie. The series ran from 1952 to 1955 and Farrell starred opposite actress Gale Storm, who played his daughter. In 1956 Farrell hosted in his own television program, The Charles Farrell Show.