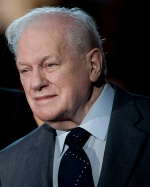 In memory of legendary actor Charles Durning, flowers were placed on his star on the Hollywood Walk of Fame on Wednesday, December 26, 2012. The star in Motion Pictures category is located at 6504 Hollywood Blvd. “Rest in Peace, Mr. Durning!” the card was signed on behalf of the Hollywood Historic Trust and the Hollywood Chamber of Commerce.

Legendary actor Charles Durning was honored with the 2,366th star on the Hollywood Walk of Fame. Leron Gubler, President and CEO of the Hollywood Chamber of Commerce, presided over the ceremony. Guests included Joe Mantegna, Gary Sinise, Ed Begley Jr., Angie Dickinson, Elliot Gould, Robert Loggia, Doris Roberts, Jon Voight, and many others. In honor of Durning's role on "Rescue Me," Los Angeles Fire Fighters from Hollywood's Station 27 participated in the festivities.

All his life, Charles Durning has beaten the odds. As a World War II hero, he has been honored by being the recipient of three Purples Hearts and one Silver Star for his bravery. He was the only member of his unit to survive the Omaha Beach "D-Day" siege on June 6th, 1944. He was taken prisoner a few months later at the Battle of the Bulge, the war's bloodiest battle, and survived a mass execution of prisoners. Even though his legs had been strafed by machine gun fire, he went on to become a professional dancer and received his first Academy Award nomination for the film "Best Little Whorehouse in Texas" where he sang and danced his way through the movie.

Not only did Charles Durning become a good actor as well, he became one of the most critically lauded, steadily working character actors of our generation, appearing in over 200 films and television shows! And this year&hellip; he was honored with the prestigious SAG Life Achievement Award.

One of the most versatile actors of our time, Durning has received two Academy Award nominations for his comedic turns in "To Be or Not To Be" and "Best Little Whorehouse in Texas". He won a Tony Award for his interpretation of Big Daddy in the 1990 Broadway revival hit of "Cat on a Hot Tin Roof" and also won a Golden Globe Award for "The Fitzgeralds and the Kennedys". Charles Durning has been nominated for nine Emmy Awards including one for his current work in the FX Network show "Rescue Me." Pretty good for a guy who once had a stutter and has been quoted as saying he lacks confidence at times.

Yes, all his life, Charles Durning has beaten the odds.

Despite his busy schedule, this World War II hero has never forgotten his fellow veterans. Every year for the past 15 years, Charles Durning goes to Washington DC to dedicate his time to perform in a Memorial Day Concert dedicated to all the veterans, past, present, and future. 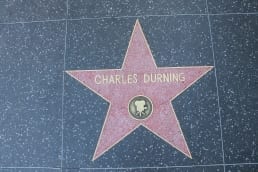