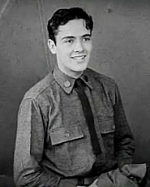 Rogers was born to Maude and Bert Henry Rogers in Olathe, Kansas. He studied at the University of Kansas where he became an active member of Phi Kappa Psi. In the mid-1920s he began acting professionally in Hollywood films. A talented trombonist skilled on several other musical instruments, Rogers performed with his own jazz band in motion pictures and on radio. During World War II, he served in the United States Navy as a flight training instructor.

Nicknamed “Buddy”, his most remembered performance in film was opposite Clara Bow in the 1927 Academy Award winning Wings, the first film ever honored as “Best Picture.”

Respected by his peers for his work in film and for his humanitarianism, the Academy of Motion Picture Arts and Sciences honored Rogers in 1986 with The Jean Hersholt Humanitarian Award. For his contribution to the motion picture industry, Charles “Buddy” Rogers has a star on the Hollywood Walk of Fame at 141 Hollywood Blvd.