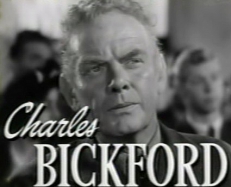 Charles Bickford was an American actor best known for his supporting roles. He was nominated three times for the Academy Award for Best Supporting Actor, for The Song of Bernadette, The Farmer’s Daughter, and Johnny Belinda. Other notable roles include Whirlpool, A Star is Born and The Big Country. Bickford was born in Cambridge, Massachusetts, during the first minute of 1891. The fifth of seven children, he was a very independent and unruly child who was tried and acquitted at nine years old of the attempted murder of a trolley motorman who had callously driven over and killed his dog. In his late teens he drifted aimlessly around the United States for a time. Before breaking into acting, worked as a lumberjack, investment promoter, and for a short time, ran a pest extermination business. He was a stoker and fireman in the United States Navy when a friend dared him to get a job in Burlesque. He did and remained on stage for the next sixteen years.

Bickford had intended to attend the Massachusetts Institute of Technology to earn an engineering degree, but while wandering the country, he became friends with the manager of a burlesque show, who convinced Bickford to take a role in the show. He debuted in Oakland, California in 1911. Bickford enjoyed himself so much that he abandoned his plans to attend M.I.T. He made his legitimate stage debut with the John Craig Stock Company at the Castle Square Theatre in Boston in 1912. Bickford eventually joined a road company and traveled throughout the United States for more than a decade, appearing in various productions. In 1925, while working in a Broadway play called Outside Looking In, he and co-star James Cagney received rave reviews. He was offered a role in Herbert Brenon’s 1926 film of Beau Geste, but anxious not to give up his new-found Broadway stardom, turned it down. Following a succès d’estime in the Maxwell Anderson-Harold Hickerson drama about the Sacco and Vanzetti case, Gods of the Lightning, Bickford was contacted by legendary filmmaker Cecil B. DeMille and offered a contract with MGM studios to star in DeMille’s first talking picture, Dynamite. He soon began working with MGM head Louis B. Mayer on a number of projects.

He became a star after playing Greta Garbo’s lover in Anna Christie, but never developed into a romantic lead. Always of independent mind, strong-willed and quick with his fists, Bickford would frequently argue and nearly come to blows with Mayer. During the production of DeMille’s Dynamite, he punched out his director. He rejected numerous scripts and made no secret of his disdain for much of the material he was offered. His association with MGM was short-lived, and Bickford asked for and received a release from his contract, but found himself blacklisted at other studios. He became an independent actor for several years. Bickford was mauled by a lion and nearly died while filming East of Java in 1935. While he recovered, he lost his contract with Fox as well as his leading man status due to extensive neck scarring coupled with his advancing age. Much preferring the character roles that now became his forte, Bickford appeared in many notable films including The Farmer’s Daughter, Johnny Belinda, A Star is Born, and Not As a Stranger.