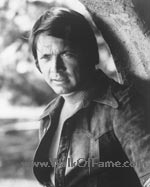 Chad Everett is an American actor who has appeared in over 40 films and television series but is probably best known for his role as Dr. Joe Gannon in the 1970s television drama Medical Center.

Everett was born Raymon Lee Cramton in South Bend, Indiana, to Virdeen Ruth and Harry Clyde “Ted” Cramton. He was raised in Dearborn, Michigan, where he became interested in the theatre as a Fordson High School student.

After attending Wayne State University, he headed to Hollywood and signed a contract with Warner Brothers studio.

According to Robert Hofler’s 2005 biography, The Man Who Invented Rock Hudson: The Pretty Boys and Dirty Deals of Henry Willson, agent Willson renamed and represented Everett. Everett claims he changed his name because he tired of explaining his real name, “Raymon-no-D, Cramton-no-P.”