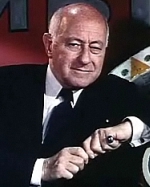 About
Cecil B. DeMille

Cecil Blount DeMille was an American film director and Academy Award-winning film producer in both silent and sound films. He was renowned for the flamboyance and showmanship of his movies. Among his best-known films are The Ten Commandments, Cleopatra, and The Greatest Show on Earth, which won the Academy Award for Best Picture.

DeMille was born in Ashfield, Massachusetts while his parents were vacationing there and grew up in Washington, North Carolina. While he is known as DeMille, his family name was Dutch and is usually spelt Demil. His father, Henry Churchill DeMille, was a North Carolina-born dramatist and lay reader in the Episcopal Church. His mother, Matilda Beatrice DeMille, was born in England to a Sephardic Jewish family but converted to her husband's faith. DeMille attended Pennsylvania Military College in Chester, Pennsylvania from the age of 15. He had an elder brother, William, and a sister Agnes, who died in childhood. Cecil DeMille's famous niece was named for her. After Henry DeMille's death at age 40, Cecil's mother, Beatrice, ran a well-known boarding school for girls in Pompton Lakes, New Jersey. Henry, a playwright, was an administrator and faculty member during the early years of The American Academy of Dramatic Arts, established in New York City in 1884. He is credited with providing its name, and both Cecil and William graduated from The Academy which they attended on scholarship. The Academy honored Cecil with an Alumni Achievement Award.

DeMille began his career as an actor on the Broadway stage in the theatrical company of Charles Frohman in 1900. His brother William was already establishing himself as a playwright and sometimes worked in collaboration with Cecil. DeMille co-starred with some of the men and women whom he would later direct in films. DeMille also served as producer and/or director for many. Some of these plays were later adapted into silent and sound films. Cecil and his brother occasionally worked with David Belasco. Belasco was legendary for the way he lit his stage scenes, as well as creating a lurid atmosphere. In 1911, Belasco premiered a play titled The Return of Peter Grimm. DeMille claimed he wrote the play and that Belasco had plagiarized DeMille's work without compensation. DeMille later adopted many of Belasco's stage lighting and atmospheric techniques in such films as The Cheat, a move some saw as revenge against Belasco.

DeMille entered films in 1913. He directed dozens of silent films, including Paramount Pictures' first production, The Squaw Man, which was co-directed by Oscar Apfel, before coming into huge popularity during the late 1910s and early 1920s, when he reached the apex of his popularity with such films as Don't Change Your Husband, The Ten Commandments, and The King of Kings. A few of his silent films featured scenes in two-color Technicolor.