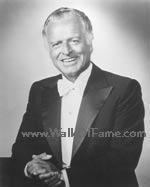 Carmen Dragon was an American conductor, composer, and arranger who in addition to live performances and recording, worked in radio, film, and television.

Dragon was born in Antioch, California. He was very active in pops music conducting and composed scores for several films, including At Gunpoint, Invasion of the Body Snatchers, Night into Tomorrow, and Kiss Tomorrow Good-bye. With Morris Stoloff, he shared the 1944 Oscar for the popular Gene Kelly/Rita Hayworth musical Cover Girl, which featured songs by Jerome Kern and Ira Gershwin.

He made a popular orchestral arrangement of "America the Beautiful" and also re-arranged it for symphonic band. According to his website, he was awarded an Emmy in 1964.