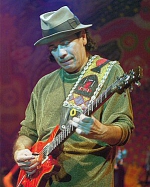 Carlos Augusto Alves Santana is a Mexican American rock guitarist. Santana became famous in the late 1960s and early 1970s with his band, Santana, which pioneered rock, salsa and jazz fusion. The band’s sound featured his melodic, blues-based guitar lines set against Latin and African rhythms featuring percussion instruments such as timbales and congas not generally heard in rock music. Santana continued to work in these forms over the following decades. He experienced a resurgence of popularity and critical acclaim in the late 1990s. Rolling Stone named Santana number 15 on their list of the 100 Greatest Guitarists of All Time in 2003. He has won 10 Grammy Awards and 3 Latin Grammy Awards.

Santana was born in Autlán de Navarro, Jalisco, Mexico. His father was a mariachi violinist, and Carlos learned to play the violin at age five and the guitar at age eight. Young Carlos was heavily influenced by Ritchie Valens at a time when there were very few Latinos in American rock and pop music. The family moved from Autlán de Navarro to Tijuana, the border city between Mexico and California, and then San Francisco. Carlos stayed in Tijuana but joined his family in San Francisco later and graduated from James Lick Middle School and Mission High School there. He graduated from Mission High in 1965. Javier Bátiz, a famous guitarist from Tijuana, said to have been Carlos’s guitar teacher who taught him to play a different style of guitar soloing. After learning Batiz’s techniques, Santana would make them his own as well.

In San Francisco, he got the chance to see his idols, most notably B.B. King, perform live. He was also introduced to a variety of new musical influences, including jazz and folk music, and witnessed the growing hippie movement centered in San Francisco in the 1960s. After several years spent working as a dishwasher in a diner and busking for spare change, Santana decided to become a full-time musician. In 1966, he gained prominence by a series of accidental events all happening on the same day. Santana was a frequent spectator at Bill Graham’s Fillmore West. During a Sunday matinee show, Paul Butterfield was slated to perform there but was unable to do so as a result of being intoxicated. Bill Graham put together an impromptu band of musicians he knew mainly from the Grateful Dead, Butterfield’s own band and Jefferson Airplane, but he had not yet picked all of the guitarists at the time. Santana’s manager, Stan Marcum, immediately suggested to Graham that Santana join the impromptu band and Graham assented. During the jam session, Santana’s guitar playing and solo gained the notice of both the audience and Graham. During the same year, Santana formed the Santana Blues Band, with fellow street musicians, David Brown and Gregg Rolie. With their highly original blend of Latin-infused rock, jazz, blues, salsa, and African rhythms, the band gained an immediate following on the San Francisco strip club. The band’s early success, capped off by a memorable performance at Woodstock in 1969, led to a recording contract with Columbia Records, then run by Clive Davis.