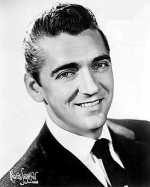 Carl Milton Smith was an American country music singer. Known as “Mister Country,” Smith was the husband of June Carter and Goldie Hill, the drinking companion of Johnny Cash, and the father of Carlene Carter. He was one of country’s most successful male artists during the 1950s, with 30 Top 10 Billboard hits, including 21 in a row. Smith’s success continued well into the 1970s, when he had a charting single every year except one. He is a member of the Country Music Hall of Fame.

A native of Maynardville, Tennessee, Carl Smith aspired to a musical career after hearing the Grand Ole Opry on the radio. He mowed neighbors’ lawns to pay for guitar lessons as a teenager. At age 15, he started performing in a band called Kitty Dibble and Her Dude Ranch Ranglers. By age 17, he had learned to play the string bass and spent his summer vacation working at WROL-AM in Knoxville, Tennessee, where he performed on Cas Walker’s radio show.

After graduating from high school, he served in the U.S. Navy from 1944&ndash;47. He returned to WROL and played string bass for country singers Molly O’Day and Skeets Williamson, and began his singing career. A colleague at the station sent an acetate disc recording of Smith to WSM-AM and the Grand Ole Opry in Nashville, Tennessee, and WSM soon signed him. In 1950, Smith was signed to a recording contract with Columbia Records by producer Don Law.

In 1951, his song “Let’s Live a Little” was a big hit, reaching No. 2 on country chart. During 1951 he had up three other hits, including “If the Teardrops Were Pennies” and his first No. 1 hit, “Let Old Mother Nature Have Her Way”. The songs made Smith a well-known name in country music. His band, the Tunesmiths, featured steel guitarist Johnny Silbert, who added an element of Western swing.