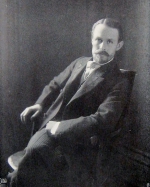 Burton Holmes was an American traveler, photographer and filmmaker, who coined the term "travelogue".

Travel stories, slide shows, and motion pictures were all in existence before Holmes began his career, as was the profession of travel lecturer; but Holmes was the first person to put all of these elements together into documentary travel lectures.

Burton Holmes was born into a middle-class Chicago family, the son of a banker. His interest in travel was sparked at the age of nine when his grandmother took him to hear a then-famous travel lecturer, John L. Stoddard. In 1890, Holmes accompanied his grandmother on a trip to Europe and when he returned showed slides of his trip at the Chicago Camera Club, of which he was a member. Holmes wrote of this event: "To take the edge off the silence, to keep the show moving, I wrote an account of my journey and read it, as the stereopticon man changed slides."

Despite the success of this event, which grossed $350 for the club, it wasn't until several years later that Holmes decided to set himself up as a travel lecturer. In 1893, after sending out 2000 invitations to a select group of Chicagoans, Holmes gave two sold-out talks about a recent trip to Japan. 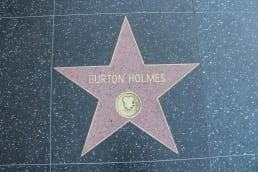