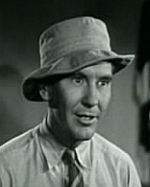 Oliver Burgess Meredith, known professionally as Burgess Meredith, was an American actor. He was best-known for portraying Rocky Balboa’s trainer Mickey Goldmill in the Rocky films and the Penguin in the television series Batman. He also earned a new generation of fans, portraying the father of Jack Lemmon’s character in the 1993 film Grumpy Old Men, and the sequel, 1995’s Grumpier Old Men, which was his final film role.

Meredith was born in Cleveland, Ohio, the son of Ida Beth and Canadian-born William George Meredith, M.D. He graduated from Hoosac School in 1926 and then attended Amherst College as a member of the Class of 1931.

Burgess Meredith was involved in theatre, film, and television, both as an actor and a director. He was adept playing both dramatic and comedic roles, and with his rugged looks and gravelly voice, he could convincingly play either an everyman hero or a sinister villain.

Meredith served in the United States Army Air Forces in World War II, reaching the rank of captain. He was discharged in 1944 to work on the movie The Story of G.I. Joe, in which he starred as the popular war correspondent Ernie Pyle.