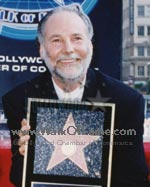 George Gard “Buddy” DeSylva was an American songwriter, film producer and record executive. He wrote or co-wrote many popular songs and along with Johnny Mercer and Glenn Wallichs he founded Capitol Records.

DeSylva was born in New York City, but grew up in California and attended the University of Southern California. His father, Aloysius J. De Sylva, was better known to American audiences as the Portuguese-born actor, Hal De Forrest.

DeSylva’s first successful songs were those used by Al Jolson on Broadway in the 1918 +Sinbad production, which included “I’ll Say She Does”. Soon thereafter he met Jolson and in 1918 the pair went to New York and DeSylva began working as a songwriter at Tin Pan Alley. In the early 1920s DeSylva frequently worked with composer George Gershwin. Together they created the experimental one-act jazz opera Blue Monday set in Harlem, which is widely regarded as a forerunner to Porgy and Bess ten years later.

In 1925, DeSylva became one third of the songwriting team with lyricist Lew Brown and composer Ray Henderson, one of the top Tin Pan Alley songwriters of the era. The writing and publishing partnership continued until 1930, producing a string of feel-good hits and the perennial Broadway favorite Good News. The popularity of this team was so great that Gershwin’s mother supposedly chided her sons for not being able to write the sort of hits turned out by the trio. The 1956 Hollywood film The Best Things in Life Are Free, starring Gordon MacRae, depicting the De Sylva, Brown and Henderson collaboration.