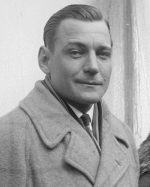 Buck Jones was an American motion picture star of the 1920s, 1930s, and 1940s, best known for his work starring in many popular western movies. In his early film appearances, he was billed as Charles Jones.

Charles Frederick Gebhart was born on the outskirts of Vincennes, Indiana on December 12, 1891. In 1907, Jones joined the US Army at age sixteen, after his mother signed a release form authorizing his enlistment. He was initially assigned to Troop G, 6th Cavalry Regiment. He served in combat and was wounded in the Philippine islands during the Moro Rebellion, deploying there in October 1907, returning to the U.S. in December 1909. He was honorably discharged that same year, at Fort McDowell, California.

Jones had an affection for racecars and the racing industry, and became close friends with early racecar driver Harry Stillman. Due to his association with Stillman, he began working for the Marmon Motor Company, where he test drove many of their vehicles. However, by 1910 he had re-enlisted in the US Army. In 1913 he requested a transfer to the Aeronautical Division, U.S. Signal Corps. He requested this due to his desire to become a pilot, however only officers were allowed pilot training. He received his second honorable discharge from the Army in October 1913.

Following his military service, he began working as a cowboy on the 101 Ranch near Bliss, Oklahoma. While attending equestrian shows he met Odille “Dell” Osborne, who rode horses professionally. The two became involved, and married in 1915. Both had very little money, so the producers of a Wild West Show they were working on at the time offered to allow them to marry in an actual show performance, in public, which they accepted. He and his wife formed their own riding expedition show, and toured the U.S.