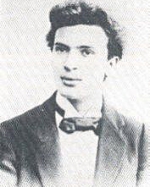 Bruno Walter was a German-born conductor. One of the most famous conductors of the 20th century, he was born in Berlin, but moved to several countries between 1933 and 1939, finally settling in the United States in 1939. He was born Bruno Schlesinger, but began using Walter as his surname in 1896, and officially changed his surname to Walter upon becoming naturalised in Austria in 1911. Bruno Walter was for many years active as a composer, but his works have not entered the repertoire.

Born near Alexanderplatz in Berlin to a middle-class Jewish family as Bruno Schlesinger, he began his musical education at the Stern Conservatory at the age of eight, making his first public appearance as a pianist when he was nine. However, following visits to one of Hans von Bülow’s concerts in 1889 and to Bayreuth in 1891, he changed his mind and decided upon a conducting career. He made his conducting début at the Cologne Opera with Albert Lortzing’s Der Waffenschmied in 1894. Later that year he left for the Hamburg Opera to work as a chorus director. There he first met and worked with Gustav Mahler, whom he idolized and with whose music he later became strongly identified.

In 1896 Schlesinger took a conducting position at the opera house in Breslau ? a job found for him by Mahler. The conductor recorded that the director of this theater, Theodor Löwe, required that before taking up this position he change his name of Schlesinger, which literally means Silesian, “because of its frequent occurrence in the capital of Silesia”, although other sources attribute the change to a desire to make his name sound less Jewish. In 1897, he took an opera-conducting position at Pressburg, and in 1898 he took one in Riga, Latvia. Then Walter returned in 1900 to Berlin, where he assumed the post of Royal Prussian Conductor at the Staatsoper Unter den Linden, succeeding Franz Schalk; his colleagues there included Richard Strauss and Karl Muck. While in Berlin he also conducted the premiere of Der arme Heinrich by Hans Pfitzner, who became a lifelong friend.

In 1901 Walter accepted Mahler’s invitation to be his assistant at the Court Opera in Vienna. Walter led Verdi’s Aida at his debut. In the following years Walter’s conducting reputation soared as he was invited to conduct across Europe ? in Prague, in London where in 1910 he conducted Tristan und Isolde and Ethel Smyth’s The Wreckers at Covent Garden, and in Rome. A few months after Mahler’s death in 1911, Walter led the first performance of Das Lied von der Erde in Munich, as well as Mahler’s Symphony No. 9 in Vienna the next year.