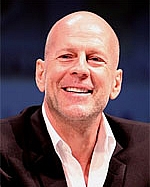 Walter Bruce Willis, better known as Bruce Willis, is an American actor, producer, and musician. His career began in television in the 1980s and has continued both in television and film since, including comedic, dramatic, and action roles. He is well known for the role of John McClane in the Die Hard series, which were mostly critical and uniformly financial successes. He has also appeared in over sixty films, including box office successes like Pulp Fiction, Sin City, 12 Monkeys, The Fifth Element, Armageddon, and The Sixth Sense.

Motion pictures featuring Willis have grossed US$2.64 to 3.05 billion at North American box offices, making him the ninth highest-grossing actor in a leading role and twelfth highest including supporting roles. He is a two-time Emmy Award-winning, Golden Globe Award-winning and four-time Saturn Award-nominated actor. Willis was married to actress Demi Moore and they had three daughters before their divorce in 2000 after thirteen years of marriage.

Willis was born in Idar-Oberstein, West Germany, the son of a Kassel-born German, Marlene, who worked in a bank, and David Willis, an American soldier. Willis is the eldest of four children: he has a sister, Florence, and a brother, David. His brother Robert died of pancreatic cancer in 2001, aged 42. After being discharged from the military in 1957, Willis's father took his family back to Penns Grove, New Jersey, where he worked as a welder and factory worker. His parents separated in 1972, while Willis was in his teens. Willis attended Penns Grove High School in his hometown, where he encountered issues with a stutter. He was nicknamed Buck-Buck by his schoolmates. Finding it easy to express himself on stage and losing his stutter in the process, Willis began performing on stage and his high school activities were marked by such things as the drama club and student council president.

After high school, Willis took a job as a security guard at the Salem Nuclear Power Plant and also transported work crews at the DuPont Chambers Works factory in Deepwater, New Jersey. He quit after a colleague was killed on the job, and became a regular at several bars.