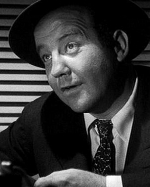 Crawford was born William Broderick Crawford in Philadelphia, Pennsylvania to and Helen Broderick, who were both vaudeville performers, as his grandparents had been. His father appeared in films in the 1920s and 1930s; his mother had a minor career in Hollywood comedies. He joined his parents on the stage, working for producer Max Gordon. When vaudeville went into decline, he attended Harvard University for three months but dropped out to work as a stevedore on the New York docks.

Crawford returned to vaudeville and radio, which included a period with the Marx Brothers. He played his first serious character as a footballer in She Loves Me Not at the Adelphi Theatre, London in 1932. Crawford’s talents were spotted by Noël Coward during the three weeks the play ran. Coward also played in the 1935 Broadway production of ‘Point Valaine’.

Early in his career, Crawford was stereotyped as a rough-talking tough guy and frequently played the villain. He gained fame in 1937, when he starred as Lenny in Of Mice and Men on Broadway. He moved to Hollywood, but did not play the role in the film version.