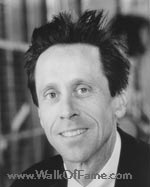 Brian Thomas Grazer is an American film and television producer who founded Imagine Entertainment in 1986 with partner Ron Howard. Together they have produced many acclaimed films, including A Beautiful Mind and Apollo 13.

Grazer produced the 2002 film 8 Mile, the live-action version of the holiday classic How the Grinch Stole Christmas!, Spike Lee’s 2006 crime-thriller Inside Man, and Ridley Scott’s American Gangster, which was nominated for two Academy Awards. His producing credits also include the films Changeling and Frost/Nixon. He is the executive producer of 24, Lie to Me, Arrested Development, Parenthood and Friday Night Lights.

Grazer appeared as himself on The Simpsons twice; in “When You Dish Upon a Star”, he received movie ideas from Ron Howard, and in “Lost Verizon” where he offered Denis Leary a job for Everyone Poops.

In March 2007, Grazer was slated to guest edit a special Sunday section of the Los Angeles Times before the newspaper’s publisher canceled its press run in wake of a scandal that ultimately led to the resignation of editorial page editor Andrés Martinez. In May 2007, Grazer was listed among Time Magazine‘s 100 Most Influential People in The World.