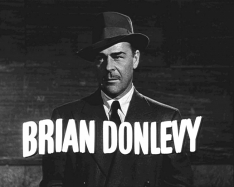 Brian Donlevy was an Irish-born American film actor, noted for playing tough guys from the 1930s to the 1960s. He usually appeared in supporting roles. Among his best known films are Beau Geste and The Great McGinty. For his role as Sergeant Markoff in Beau Geste he was nominated for the Academy Award for Best Supporting Actor.

His obituary in The Times newspaper in the United Kingdom stated that “any consideration of the American ‘film noir’ of the 1940s would be incomplete without him”.

Donlevy was born Waldo Brian Donlevy in County Armagh, Ireland to a whiskey distiller and his wife in 1901. When he was 10 months old his parents moved to Racine, Wisconsin. When he was 9 years old, his family moved to Cleveland, Ohio. He lied about his age in 1916 so he could join the army. When Gen. John J. Pershing sent American troops to invade Mexico in pursuit of Pancho Villa–Mexican rebels under Villa’s command raided Columbus, NM, and killed 16 American soldiers and civilians?Donlevy served with that expedition and later, in World War I, was a pilot with the Lafayette Escadrille, a unit of the French Air Force made up of American and Canadian pilots.

Donlevy began his career in New York in the early 1920s, appearing in many theater productions and also winning an increasing number of silent film parts. Previously, he had modeled for the illustrator J.C. Leyendecker who produce illustrations for the famous Arrow Collar ads. His Broadway credits included Hit the Deck and Life Begins at 8:40.